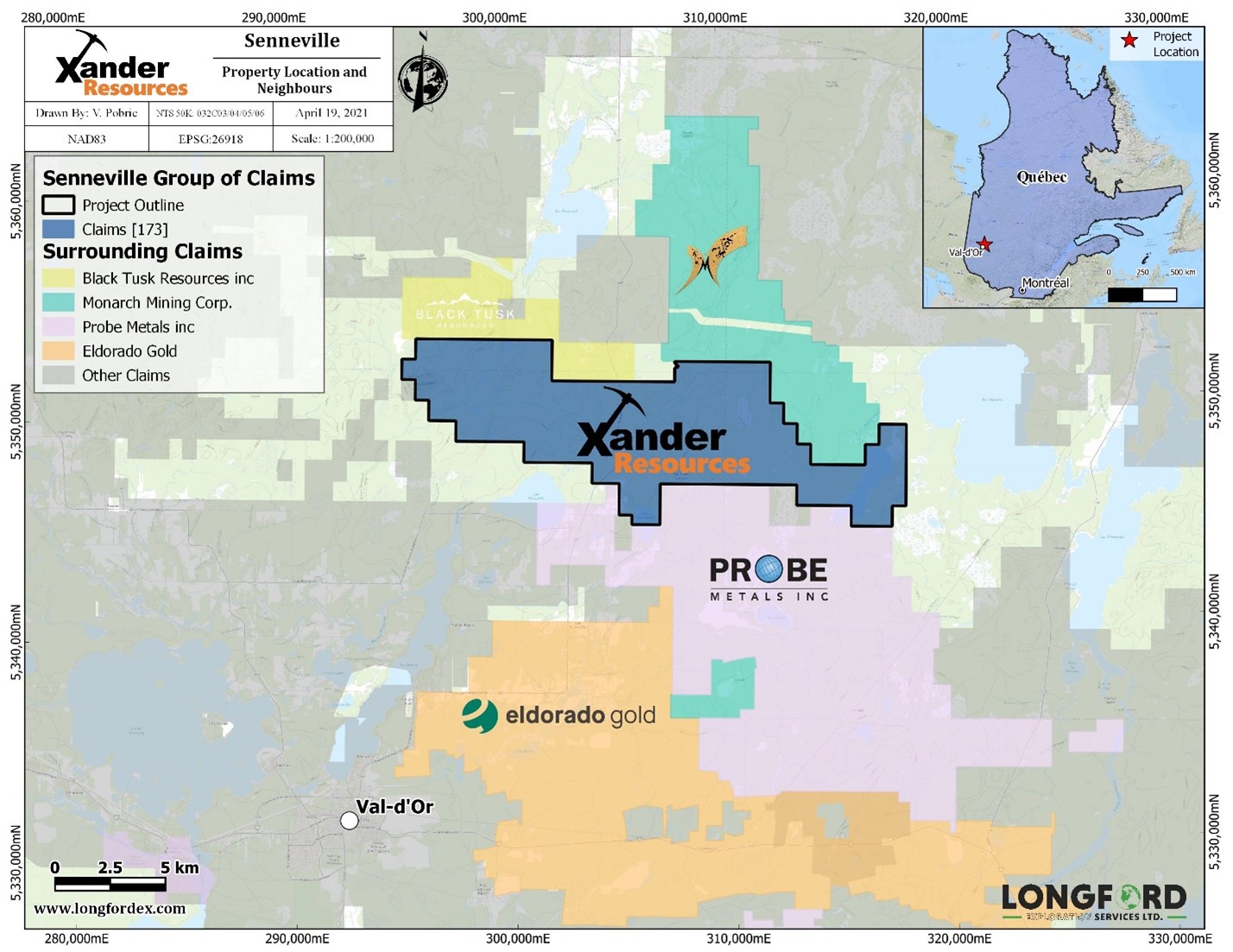 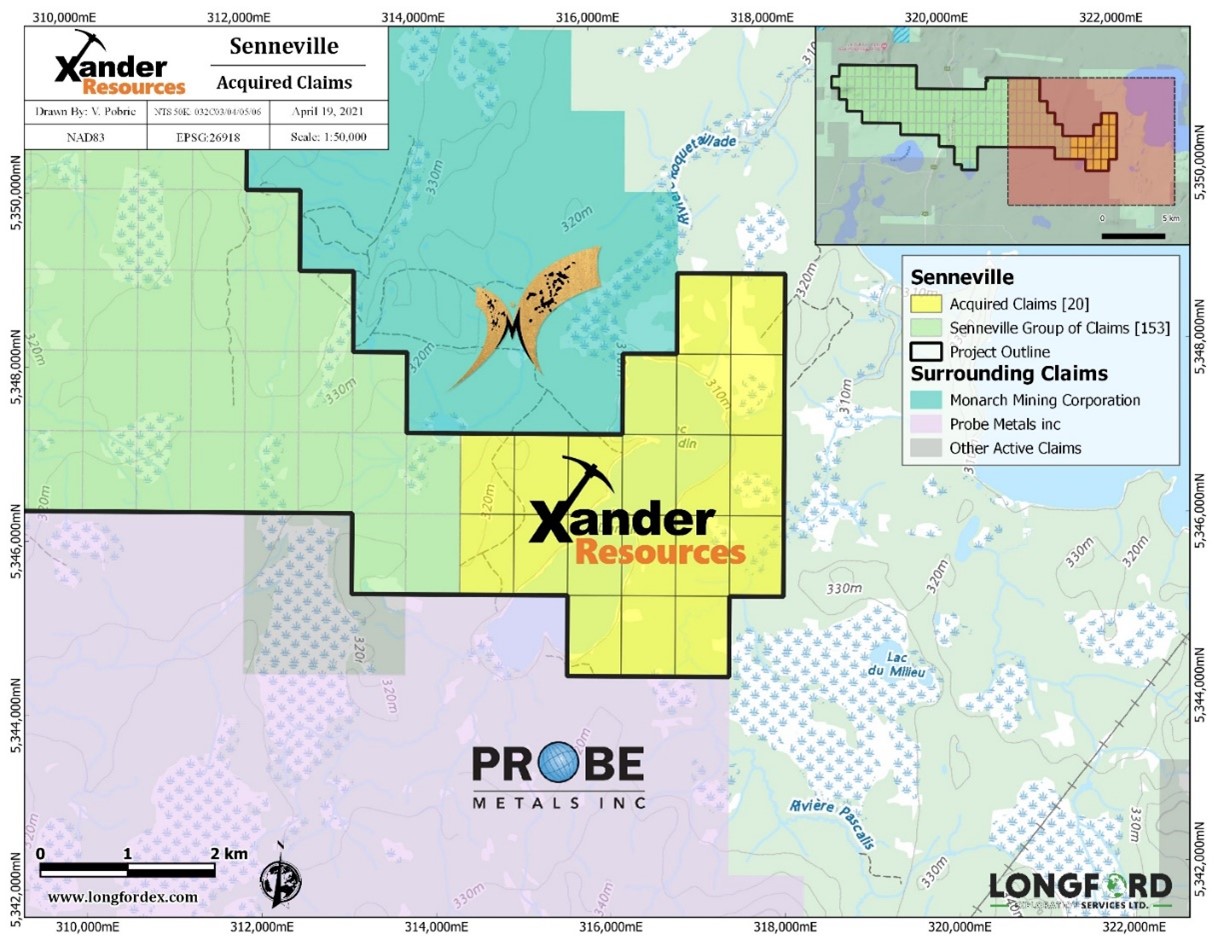 The Senneville Claim Group comprises of three contiguous properties totalling 151 claims (90 sq km) referenced as Senneville South – 9 claims, Senneville West – 80 claims, and Senneville East – 62 claims. An additional 20 claims have been acquired creating a new total of 171 claims (102 sq km) Senneville East – 82 claims. Closing will occur on or before the fifth day following acceptance by the TSX Venture Exchange of notice of the transaction described herein and no later than May 15, 2021. The contact area of the Pascalis Batholith in our East Group of Claims is contiguous to Probe Metals (TSX.V:PRB) and Monarch Mining (TSX:GBAR).

The Senneville East claims are located in the eastern part of the Abitibi Greenstone Belt, about 30 km north of the gold mining centre of Val-d’Or and extend from just east of Highway 397, where they adjoin the Senneville West and South claims, to the contact area of the Pascalis Batholith.

The Fenelon Gold Camp is considered by many gold experts to be the next major gold producing district in Canada and has sparked great exploration interest, due to the exploration successes of the Wallbridge Mining, Midland Exploration, Probe Metals. Great Thunder Gold and Goldseek Resources. 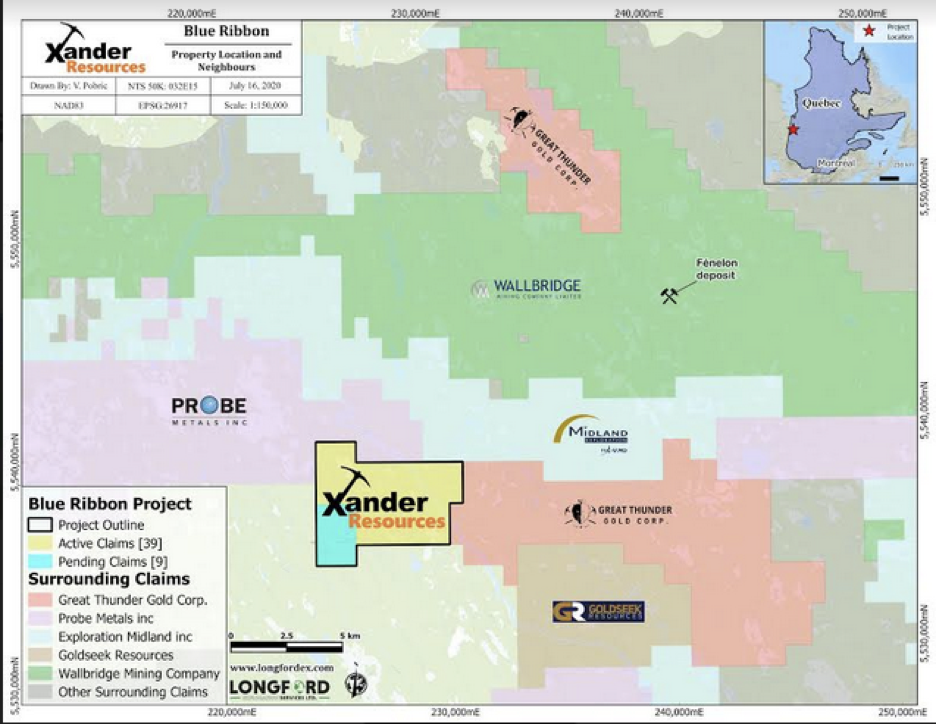 The Blue Ribbon Property is ideally positioned in the midst of this current exploration activity, located just 11 km south-west of the Wallbridge Mining Fenelon Mine Project. The Property is contiguous with Probe Metals, Midland Exploration, and Great Thunder Gold, and in proximity to Goldseek Resources. The Property comprises 34 claims which cover approximately 1,885.25 hectares (18.88km2). Access to the Property is by road 810, off Highway 109, and thereafter by a series of logging roads. The northern portion of the Property overlies the Broullian-Fenelon Group of rocks, which is comprised of felsic to mafic volcanics and sediments and is located in the northernmost greenstone segment of the Abitibi Sub-province, a region which is underexposed and underexplored. The southern part of the Property overlies the northern edge of the Broullian Intrusive complex. The intrusive/volcanic contact is coincident with the west-northwest trending Bapst Fault. The Bapst Fault trends NW-SE through the Property and is characterized by brecciated and sheared dacite, often with disseminated pyrite.

The Urban Barry Gold Camp is one of the most active exploration camps in the world. The camp currently hosts 8 million ounces of gold with area investment by a major (Kirkland Lake Gold) in both Osisko Mining and Bonterra Resources. Other companies actively conducting exploration and development in the area are Midland Exploration, Soquem and Globex. 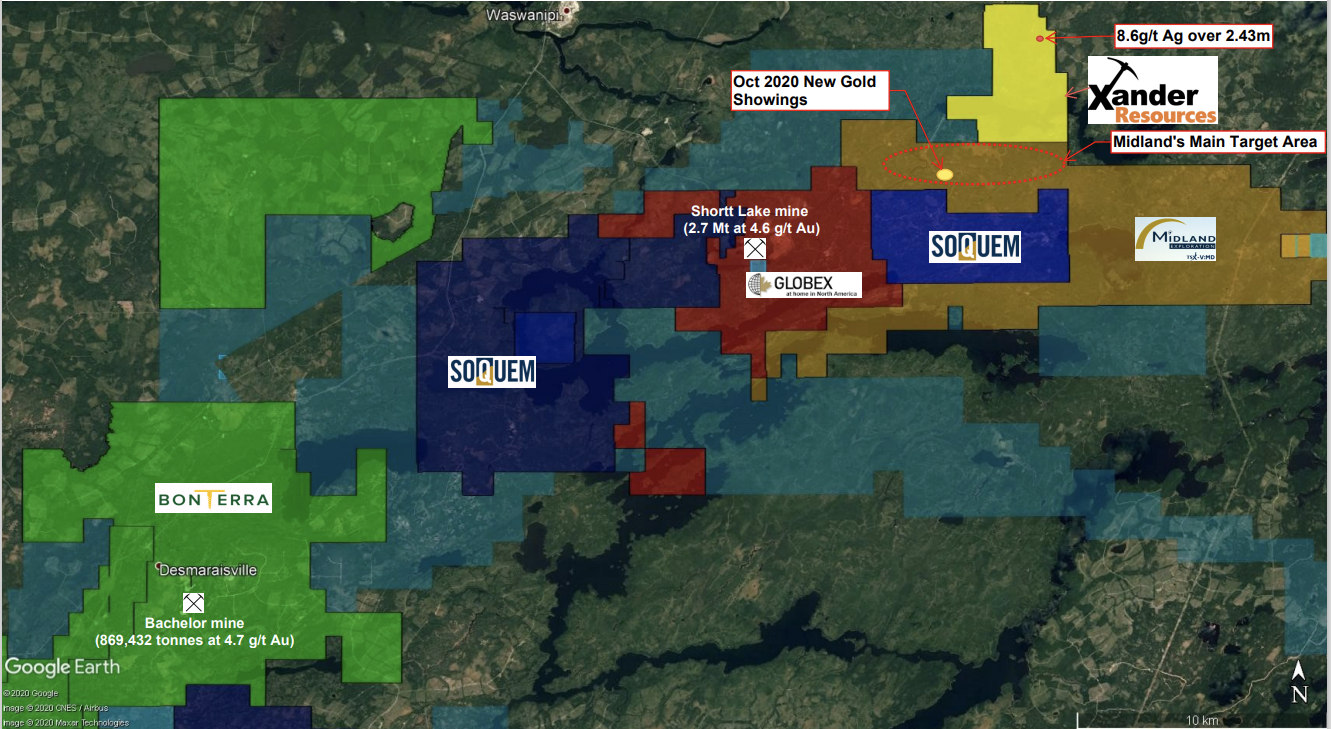 The Bachelor North Property comprises 35 mineral claims located in Waswanipi, Quebec, and is contiguous to and north of Midland Exploration’s Lewis property, and to the southwest are Soquem, Goldex and Bonterra. The property is located a little east of the Lamarck-Wedding deformation corridor where several mining sites such as the Shortt Lake mine (2.7 Mt at 4.6 g/t Au), the Bachelor mine (869,432 tonnes at 4.7 g/t Au), the Coniagas mine (718,465 tonnes at 10.77% Zinc) and the Langlois mine (65 Kt Zinc concentrate, 2,1 Kt copper concentrate, 553 troy ounces Silver concentrate and 1,9 K troy ounces Gold concentrate) have been exploited. The corridor includes rhyolites said to be fertile with respect to VMS mineralization and a panoply of intrusions ranging from synvolcanic tonalites to late alkaline intrusions (syenites, carbonatites, kimberlites). The rocks covering the property are of felsic to mafic compositions favourable to orogenic gold with granitic masses around the claims. A silver showing of 8.6 g/t Ag was discovered in 1980 by drilling (80-LRC-1) in an H.E.M. conductor identified by geophysics.