Xander Resources currently has three separate properties that make up the Senneville Claim Group in the Val-d’Or gold camp within the Abitibi Greenstone Belt. To the North the Senneville Claim Group is contiguous to Monarch Gold which, on November 2, 2020, announced their acquisition by Yamana Gold for approximately $152 million, effectively selling their Wasamac underground project to Yamana. Wasamac has proven and probable reserves of 1.8 million ounces of gold at 2.56 g/t. To the South, the Senneville Claim Group is contiguous to Probe Metals which, on October 20, 2020, announced expansion drilling with four drills currently active on the Pascalis Gold Trend where recent drilling results of 5.9 g/t Au over 9.2 metres were reported. Probe Metals also announced the discovery of two new gold zones, one of which returned 94.1 g/t Au over 0.6 metres. 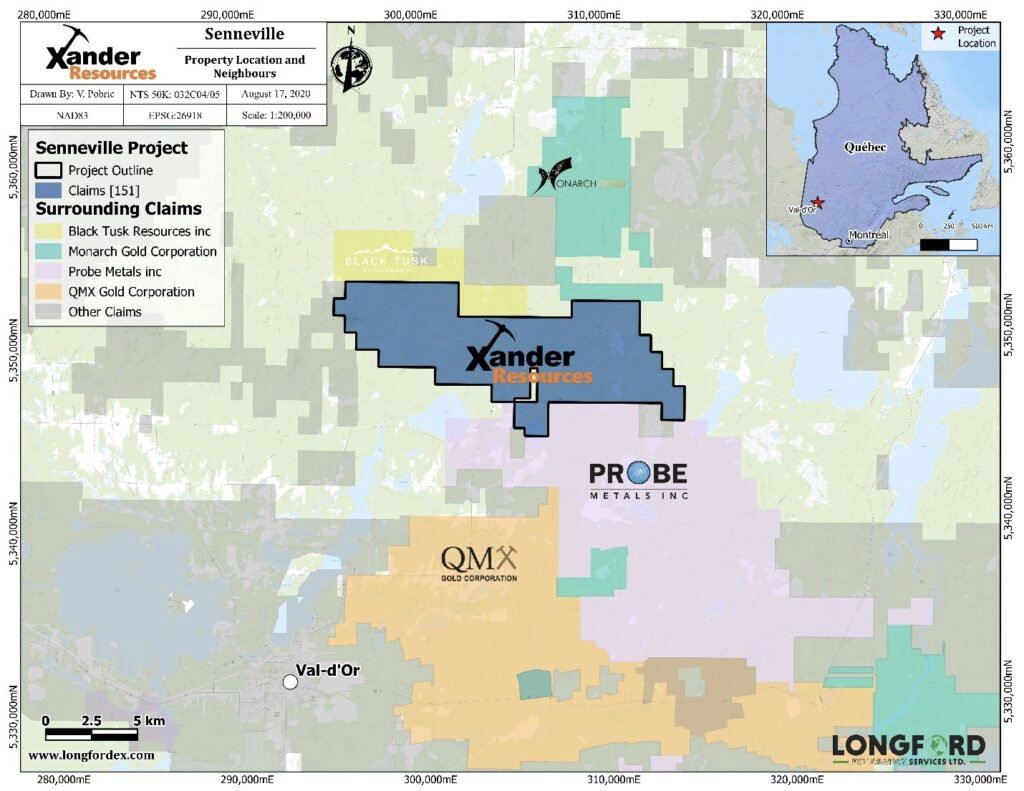 The Senneville Claim Group comprises of three contiguous properties totalling 151 claims (90 sq km) referenced as Senneville South – 9 claims, Senneville West – 80 claims, and Senneville North – 62 claims. The Senneville East claims are located in the eastern part of the Abitibi Greenstone Belt, about 30 km north of the gold mining centre of Val-d’Or and extend from just east of Highway 397, where they adjoin the Senneville West and South claims, to the contact area of the Pascalis Batholith.

The Senneville East claims overlie the contact between the Lanaudiere Formation Volcanics and the Pascalis Batholith. The eastern border of this intrusive is the site of many significant gold showings. Apart from the Mackenzie Break deposit, the western side of the intrusive has, to date, not revealed a similar abundance. However, in the government document PRO-91-18, Moorehead J., 1991 p. 4, the first recommendation by the author is that the western boundary of the Batholith contact should be explored between the Mackenzie Break deposit southeast toward Lac Dondin.

The Senneville East claims cover about 7 km of this contact. The extreme southwest corner of the Senneville East ground is underlain by the Garden Island sediments which are primarily wackes, siltstones, and conglomerates. To the south, these are in contact with the narrow eastern end of an east trending salient off the La Corne Batholith. To the north, these sediments are in contact with the Lanaudiere Group which is predominantly basalt and mafic volcaniclastics, within which are narrow units of komatiite, and ultramafic and gabbroic sills. All of these units trend west-northwest and their contacts are usually dextral or reverse dextral faults, with steep dips to the north. Intruded into all these units are northeast trending Proterozoic Diabase dykes.

Previous work on the Senneville south claims includes an old trench approximately 75 meters in length, called the Céré zone, which was excavated in 1946 and returned a value of 49.5 g/t Au (manual sample). In 2012 a drilling program by a previous claim holder focussed on defining the south eastward extension of the Cere gold showing onto the present Senneville East claims. Both the showing and the drill holes are now within the Senneville East claims. Two of three drill holes reported values of 9.79 g/t Au over1metre and 11.03 g/t Au over 1 metre. These intersections remain to be followed up to the southeast.

Below is a compilation by ORIX Geoscience Inc of reported historical gold references on the Senneville South claims (Area Map alongside Route 397 Nord, 22 km North East of Val-d’Or). 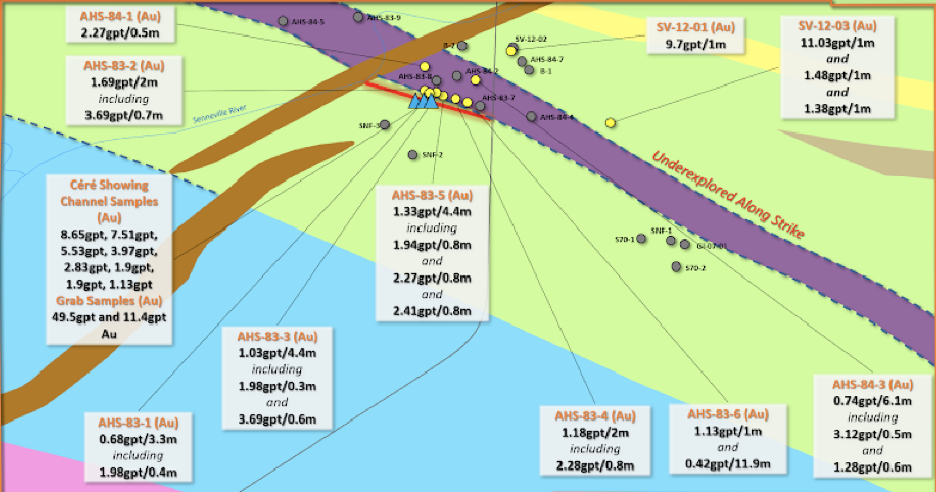 Drilling locations have been targeted for the area and a plan prepared for a systematic program to position 9 drill holes in the area East-South-East of the Céré Gold zone. Permits have been granted and drilling of the first three holes in scheduled to commence in February 2021.

The 2012 boreholes SV-12-01 (9.7 g/t Au) and SV-12-03 (11.03 g/t Au) will be doubled (twinned) in order to confirm the three (3) previously intersected Gold zones. The remaining holes will be positioned further east with the objective of extending the mineralized zones and providing a better understanding of the structures containing these intersections.

This 80 claim group is contiguous with the Senneville South claims and is north of, and contiguous to Probe Metals Val-d;Or East project. Further south QMX Gold reported on December 2, 2020, a 53% increase in indicated resources and a 100% increase in inferred resources at their Bonnefond South property. Historic anomalous base metal values from drilling and surface sampling on the senneville North claims are sufficiently encouraging to warrant the drilling of untested geophysical anomalies. Additionally, these values may be the expression of deep mineralization which would require deep penetrating geophysical methods, such as magnetotellurics (MT),

The claims also have PGM potential as they are in proximity to the Fiedmont PGE property to the north, where values from both drilling and surface sampling range from 1.5 to 6.7 g/t PGEs, and gabbros and ultramafics on the property and therefore should be tested for PGEs.

In the northeast segment of the property there are a number of interesting stripped areas thought to be from the 1980’s or 1990’s. No documentation for this work has been found. At this time, it is not known what the stripping was targeting.