This region is known as the Fenelon Gold Camp, and it’s considered by many gold experts to be the next major gold producing district in Canada. Ceo.ca user @GoldTelegraph has prepared an excellent backgrounder on nearby gold plays for investors, available here: 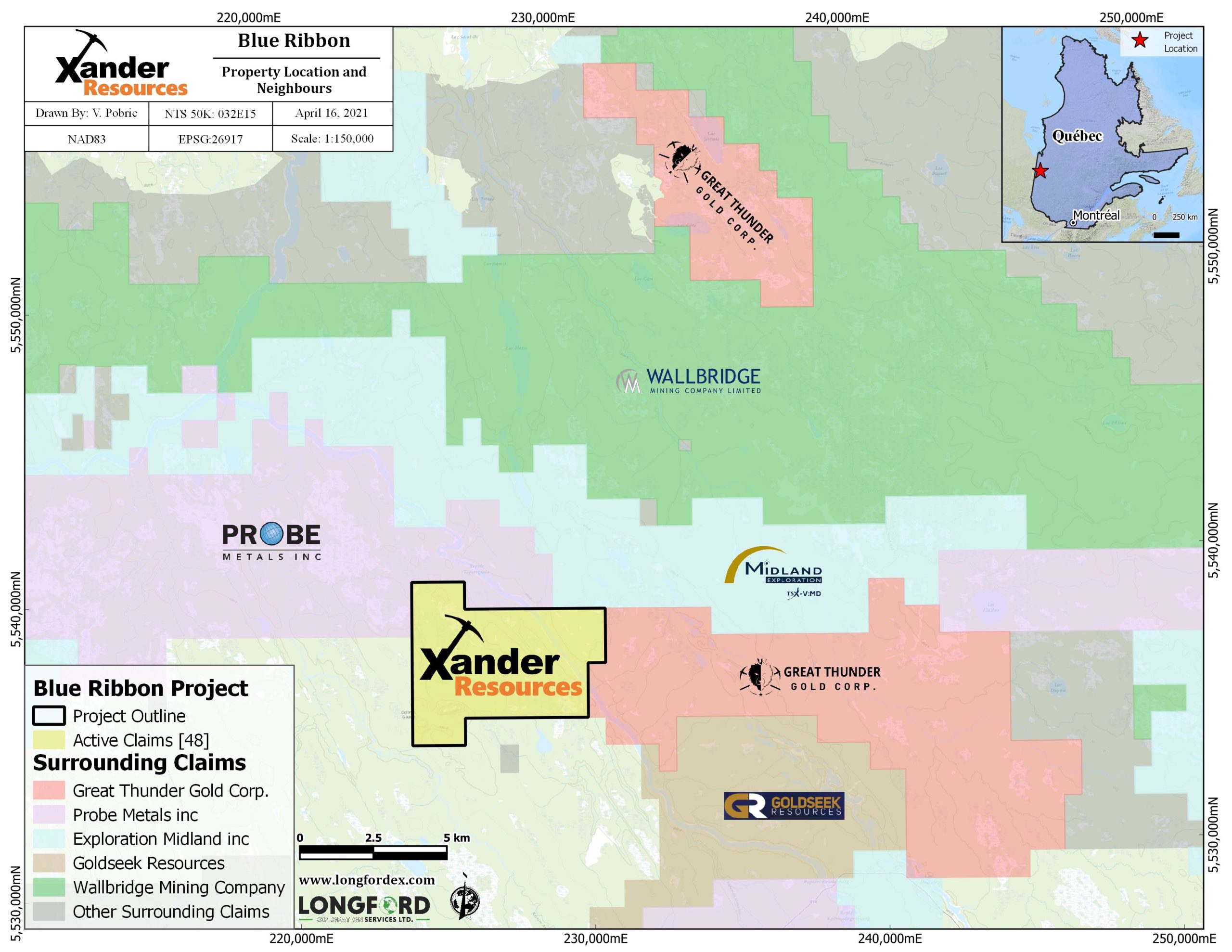 The Fenelon Gold Camp has sparked great exploration interest, due to the success of the Wallbridge Mining exploration results announced in their news releases dated December 3, 2019, January 28, 2020 which reported of 22.73 g/t gold over 48.01 meters, 43.47 g/t gold over 19.00 meters. Following their announcement on October 13, 2020, of a $112 million 2020-2021 exploration and development program they announced on November 19, 2020, drilling results of 5.07 g/t Au over 100.6 metres including 29.03 g/t Au over 7.3 metres in the Tabasco-Cayenne zones, and on January 20, 2021 announced and 3.48 g/t Au over 54 metres. Probe Metals’ October 28, 2020, news release reported intersects of 5.9 g/t Au over 9.2 metres in a new discovery 600 metres south of the former Beliveau Mine. Midland Exploration announced on January 12, 2021, intersection of a new gold zone 350 metres from the Golden Delilah on Samson, southeast of the Wallbridge Fenelon Tabasco deposit. Intersections of 23 g/t Au over1.5 metres were reported and an additional 3,500 metres of drilling is planned for the 2021 winter. Drilling in 2021 is also planned for the Midland/Probe (50/50) joint venture on 226 claims covering the Lower Detour Gold Trend over a strike length of 35 km. Great Thunder Gold announced on October19, 2020, a 13 hole drill program targeting a conductive trend in the northern portion of their property, 6.5 km south of the Fenelon deposit. Goldseek Resources announced on November 18, 2020, three near-ready targets for their maiden drilling program along the 7.3 km strike of the Bapst fault.

The Blue Ribbon Property is ideally positioned in the midst of this current exploration activity, located just 11 km south-west of the Wallbridge Mining Fenelon Mine Project. The Property is contiguous with Probe Metals, Midland Exploration, and Great Thunder Gold, and in proximity to Goldseek Resources. The Blue Ribbon claims are the only property in the Fenelon Gold Camp with gold found at surface. The Property comprises 48 claims covering approximately 1,885.25 hectares (18.88km2). With access by Road 810, off Highway 109, and thereafter by a series of logging roads. The northern portion of the Property overlies the Broullian-Fenelon Group of rocks, which is comprised of felsic to mafic volcanics and sediments and is located in the northernmost greenstone segment of the Abitibi Sub-province, a region which is underexposed and underexplored. The southern part of the Property overlies the northern edge of the Broullian Intrusive complex. The intrusive/volcanic contact is coincident with the west-northwest trending Bapst Fault. The Bapst Fault trends NW-SE through the Property and is characterized by brecciated and sheared dacite, often with disseminated pyrite.

Historical Work on the Property

Owing to the depth of overburden overlying the volcanics, there has been no recorded sub-surface exploration on the Property except four 1990 drill holes conducted by Corona Corporation, which targeted the Bapst Fault (GM 50733). There have been a number of limited area ground Electromagnetic and Magnetometer surveys which touched the present Property or were rarely completely within it. In 1969, on the south segment of the Property, within the Broullian Intrusive Complex, a government geologist located an old trench which had exposed a 100 foot-wide zone of quartz-ankerite veins in sheared diorite. The shear zone carried small amounts of pyrite and chalcopyrite and a few specks of native gold in quartz veins. No assays were given. (Remick, J.H., 1969 RP 564(A) p. 20). No assays were reported. The same shear zone was later visited and sampled in 1986 by government geologist Sylvain Lacroix who obtained a value of 8.5 g/t Au over 0.76 metres.

There are many gold and base metal occurrences within the Broullian-Fenelon Volcanics on the south side of the Broullian Intrusive Complex, including the former Selbaie Mine. The eastward extension of the Lower Detour Deformation Zone/the Grasset Deformation Zone is located just to the north of the Property. The Bapst Fault, which extends the length of the Property, may be a splay or bifurcation of the Grasset/Lower Detour Deformation zone.

Current Exploration on the Property

In September 2020, Xander received the necessary permitting and conducted an exploration program with heavy machinery to clear and clean an area of outcrop hosting the Remick trench gold showing, and to undertake a thorough program of exposing and expanding the trench and surrounding area. A Magnetic Geophysical Survey was also undertaken.

Exploration work completed on the property around a showing consisted of excavation of 4 trenches 3 to 7 metres wide by 20 to 30 meters in length and groving on 35.3 meters of rock for a total of 40 samples. These samples were sent for gold analysis to the ALS Geochemistry laboratory in Val-d’Or. A number of old trenches were observed and the mineralization on the property is contained in a diorite shale rock altered to ankerite and silica with small quartz veins. The mineralization is represented by millimeter grains of pyrite and chalcopyrite (1 to 4%). The envelope of this zone is approximately 10 meters and visible for approximately 50 meters of length. The nature of the very wet ground slowed down further excavation work. Analysis of the UAV Drone high resolution magnetometer survey completed in October indicated that the site where the recent excavation work took place is located in a magnetic hollow south of two faults. The Magnetometer was completed over a 1.5 km by 1.5 km grid over the historical trenching and gold showing. Two drill pads were prepared at the discovery site for future drilling when the property is more accessible and after completion of further airborne geophysics and follow-up groundwork. 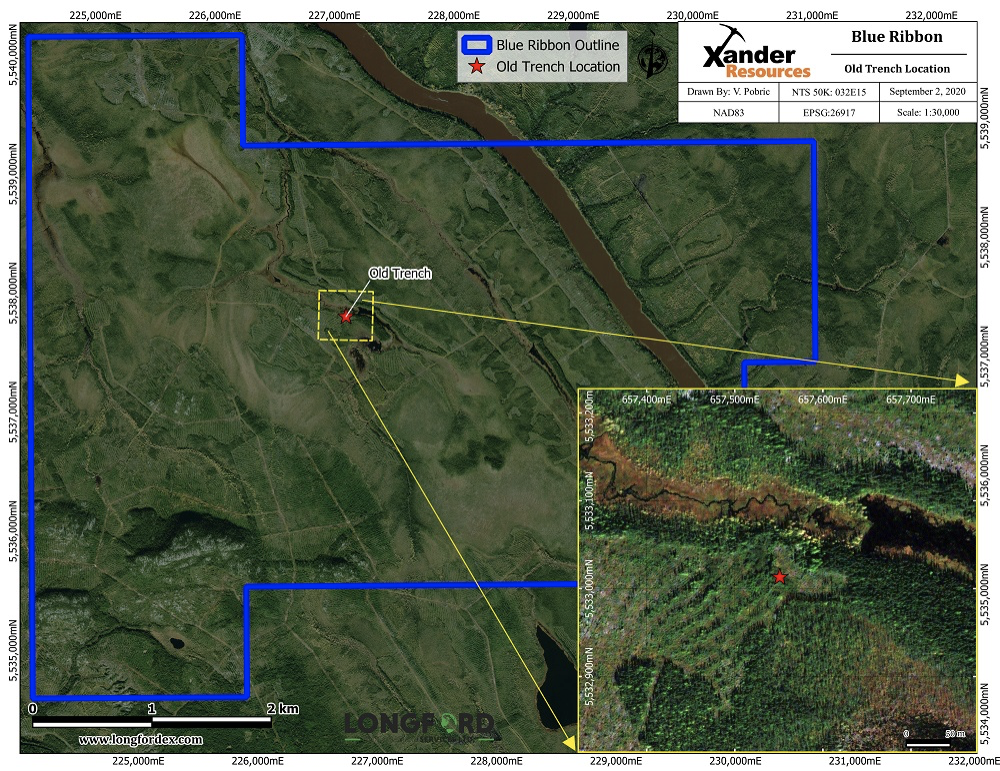 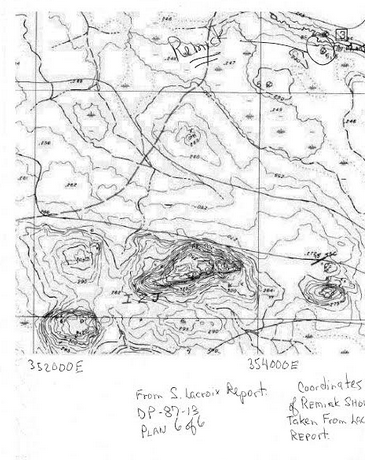 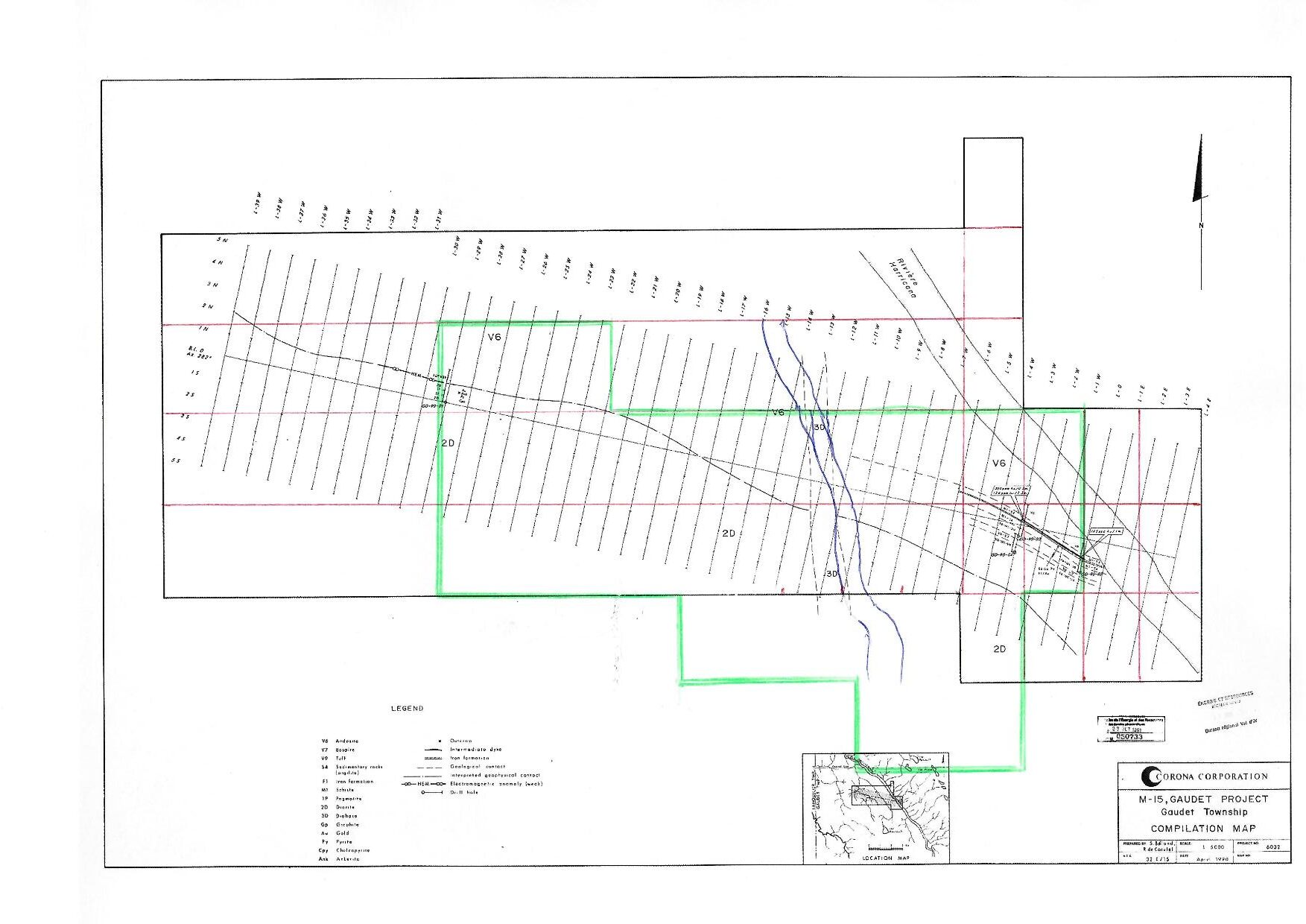 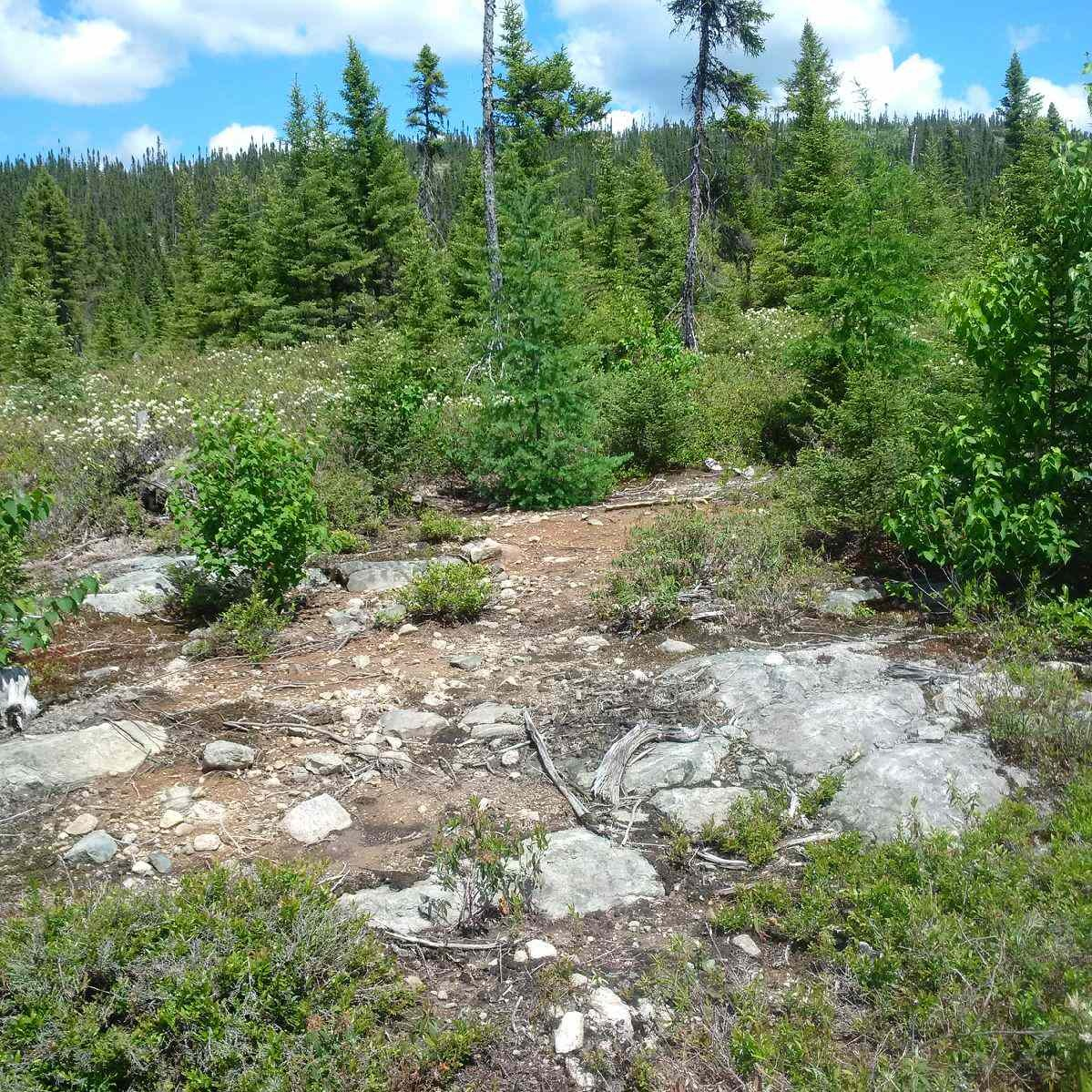